Tor Beckstoffer To Kalon 2016 garnered a nearly perfect score from Robert Parker. With only 25-barrels made, that’s a total production of 600 cases…

From Robert Parker’s The Wine Advocate, “Bottled in July 2018, the 2016 Cabernet Sauvignon Beckstoffer To Kalon is deep garnet-purple colored, with warm cassis, Black Forest cake, black raspberries and earth with a floral and spicy undercurrent with scents of roses, cinnamon stick and cedar chest. The palate is full-bodied, lively and very vibrant, with firm, grainy, ripe tannins, finishing long and mineral laced. This is a very exciting wine – polished with bags of pedigree and complexity and still so very, very delicious! 600 cases produced.” 98 POINTS ROBERT PARKER

If you had to choose just one, what vineyard do you think is THE BEST in the entire New World? Many would argue that it’s Andy Beckstoffer’s To-Kalon Vineyard which regularly garners worldwide accolades and attracts some of the most talented winemakers to produce single vineyard To-Kalon wines.

Clinching 98 Points from Robert Parker, this beauty was authored by by Jeff Ames, former assistant winemaker, who worked alongside Thomas Rivers Brown at Schrader, Maybach, Outpost as well as Tor before he took over as head winemaker… tor beckstoffer to kalon 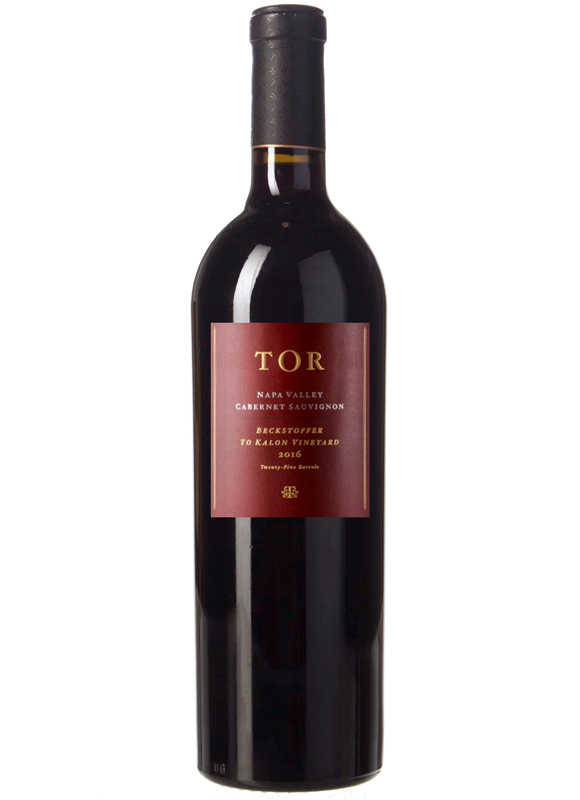 WINEMAKER’S TASTING NOTES: “Once you learn the smell of To Kalon it is one of the easiest wine to pick out of a line up. That distinct mix of red and black fruits along with damp earth and a touch of mint always shows through. This year’s To Kalon is one of the finest we have ever produced (and we have made To Kalon for 13 years!). The complex interplay of earth and fruit makes this wine unique each and every year. As with all To Kalons that we have made, this will actually be pretty approachable on release but should age effortlessly for at least 10 years.”

WINEMAKING: The 2016 Tor To Kalon Cabernet was once again fermented with all of our clone 337 Cabernet from our rows at the back of the vineyard. This block is always thinned to one cluster per shoot and that thinning (as rough as it is to see) allows for very even ripening and development. The To Kalon was on its skins for a fairly normal amount of time and did not need the full extra week-10 days that we utilized on the other Cabernets. For this wine we continued to used a mix of Darnajou and Taransaud barrels.

VINEYARD: Beckstoffer To Kalon continues to receive world-wide accolades, particularly in the last decade. The vineyard is on a gentle slope on the western foothills of the Oakville appellation. Top soils are Bale loam/Bale clay loam and running through the middle and west side of the vineyard are remnants of old stream beds riddled with rock. For the last decade, we have worked with six blocks of Cabernet Sauvignon and two blocks of Cabernet Franc. Each vintage tells a different story, and the best wines can be single blocks, or blends of blocks.