Master Sommelier Tasting Notes: “This absolutely splendid medium ruby colored Pinot Noir is the closest wine I’ve found in the US to mimic an incredible French Burgundy. It has a very intense bouquet that is so perfumed and penetrating that the nose alone instantly takes me to my happy place – the concentrated red fruit with cranberry, tart cherry, sarsaparilla, rhubarb, white strawberries, fresh sage and dried flowers are mesmerizing and make my mind swim. The palate has a satin-like texture with focused, complex bright red fruits, strawberry preserves, red pie cherries, earthy truffles, exotic Asian spices, hints of cola and liquid minerals. The finish has linearity to it and is very long with an understated elegance. Probably my biggest surprise in the last year and I highly recommend it.” Kevin M. Vogt, 98 POINTS

Winemaker Nicholas Maloney is a Sonoma native who operates Father John Wines, dedicated to the late Reverend, John Weaver, a renowned Episcopalian priest and Nick’s grandfather. Nicholas has spent considerable time in Burgundy, having studied at and graduated from the world-renown Lycée Viticole in Beaune. He has developed his winemaker skills with stints at Maison Ilan in Nuits-Saint-Georges, and Domaine Rollin in Pernand-Verglesses as well as Clos du Bois and Porter-Bass in California.

Father John was launched in 2010 with a Pinot Noir from Oehlman Vineyard on Vine Hill Road in Graton. The 2014 Father John Pinot Noir is currently one of the few American Pinot Noirs to be found on restaurant lists in Burgundy and is especially popular with the Swiss, Belgians, Danish and English. With the 2015 vintage, he has added a vineyard in Mendocino County that has Martini clone Pinot Noir vines dating to 1968, and a vineyard on Mendocino Ridge. He is also releasing a Bourgogne wine he crafted in France and imported to the United States. Father John wines are sold mainly to Europe with exports making up over 60% of total sales. In the United States, New York, Colorado and the San Francisco Bay area are the top markets, with increasing interest from Asia. 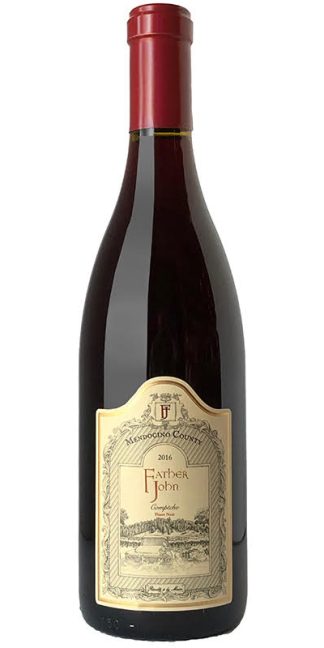